Over the past few years, the topic of the security of several Web browsers, including Firefox, Chrome, and Safari, have been rolling out DNS over HTTPS (DoH), which as brought the question of DNS security to the forefront, but also resulted in (or just revealed?) a lot of confusion about DNS security. This post is the first in a series on that topic, covering the basics of DNS and some of the security properties. Future posts will cover DNSSEC, DoH, etc.

For obvious reasons, people don't want to memorize these addresses and instead want to use names, such as example.com. The Domain Name System (DNS) is responsible for mapping these names (domain names, hence "Domain Name System") onto addresses. This lets you type https://www.example.com/ into your browser, with the computer then figuring out the actual IP address and connecting to it. The DNS can also serve other kinds of information than IP addresses, such as MX records, which say where to find a mail server for a given domain (this is what allows me to have the mail and Web service) or TXT records, which contain freeform text.

DNS names consist of a series of names ("labels") separated by a period (conventionally called a "dot"). This is arranged in a hierarchy so that (for example) example.com is "owned" by .com. Conceptually, you organize the names in a tree, with the name being read right to left and the tree organized from top to bottom. Thus example.com is the node at the lower left of the tree: 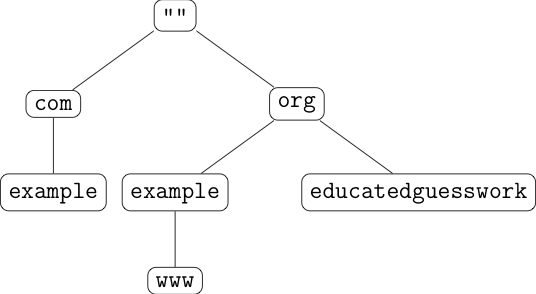 Every node on the tree can have data associated with it, so for instance, example.org could have IP address 192.0.2.1 and www.example.org could have IP address 192.0.2.2. This is a familiar computer science data structure and as you might expect if you are used to working with trees, you look up data in the tree (the jargon here is "resolving") by starting at the top of the tree and working your way downwards.

The figure below shows the process of resolving example.org. (I know that this is complicated, but don't worry I'll walk through it.)

The general structure here is what's called a "request/response"[1] protocol: the client sends a request to a server and gets a response. There are three request/response pairs, each to a different server. I go through each message below.

At this point (after three round trips), the client knows the IP address for example.org.

In the description above, I talked about the "client" resolving a domain, but as a practical matter, this process is mostly not done by end-user computers. Instead, those computers talk to what's called a "recursive resolver"[4] provided by the network. The way this works is that the user's computer sends its query to the recursive resolver, which does the whole resolution process shown above and then returns the answer, like so:

Historically, this approach has been seen as having number of advantages. First, it allows the recursive resolver to cache. If your network has 10 clients (not unusual for even a small home network), then it's kind of silly to have each one separately contacting the resolver for google.com to learn Google's address (and even sillier each time someone wants something in .com. The recursive resolver can cache the first response it receives[5] and return responses immediately to other clients, thus reducing the load on servers and also improving performance for users because you don't need as many round trips to resolve a name.

Second, it allows the recursive to apply local policies. For instance, suppose that I don't want users on my network to go to attacker.invalid, I can program my recursive to return an error instead of resolving it, thus effectively filtering out those names (this is often called "blackholing"). It's pretty common to use this kind of DNS filtering technique in schools, libraries, etc. to filter out sites deemed inappropriate. Of course, whether this is an advantage depends on one's perspective: if you're a user who wants to visit a site that has been filtered in this way, you might think otherwise (I'll get into this more in a future post).

You can also use control of the resolver to create names that only resolve locally. Suppose you have something (e.g., a printer) that you only want to be accessible to users on your local network. You can (partly) achieve this by not having the name be publicly resolvable but by having the recursive resolver inserting responses for it. This is called split horizon DNS.[6] A similar technique is used by some ISPs to serve ads by detecting if you try to resolve a name which does not exist (e.g., because of a typo) and inject their own response which points you to a page they control.

Historically, software on the user's computer didn't even talk to the recursive resolver directly. Rather, it called an operating system API that did the work for it. This saved work for the client programmer as well as providing a consistent experience between different clients on the same machine. This also allowed the operating system (and the administrator) control of the resolution process, which is especially important if you are running other name systems besides DNS, such as Windows Internet Name Service; the operating system can automatically check all the potential name services without bothering the client. Now that DNS is so dominant, this consideration is less important, and as we'll see later, DNS in applictions is also becoming more popular.

Of course, this is not exactly convenient and most people have never done it (though you still can if you want to!). Instead, when you join a network, the network sends your device configuration information, including the IP to use and its recursive resolvers[7].

This means that whoever controls your network controls which DNS server you use. As a practical matter, there are several main cases:

It's also possible to use a "public recursive resolver", which is one that is not associated with a given network but just offers DNS service to anyone. There are a number of popular public resolvers, with the best known being:

The reason for the simple addresses is that they are easy to memorize and therefore to manually configure. 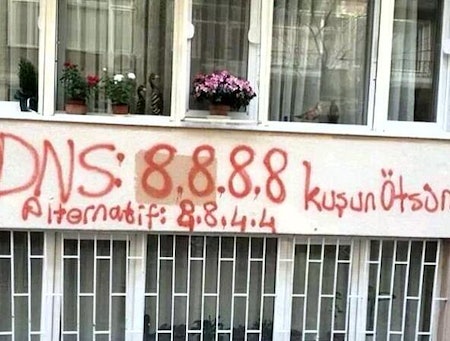 There are a number of reasons to use a public resolver, including:

These resolvers are quite popular. As of 2019, about 9% of DNS traffic went through Google public DNS alone.

DNS security and privacy is, to use a technical term, "bad". DNS was designed back in 1987 in an era where there was basically no encryption[9] on the Internet and until recently, not much had changed.

There are two major attack models to consider:

Historically, DNS security mostly focused on preventing forged responses by off-path attackers, which it should have been possible to protect against even without cryptography. In practice, however, due to some misfeatures in the protocol combined with some implementation errors (Son and Shmatikov do a good job covering this) DNS has not done always done a fantastic job here, although modern resolvers have a number of defenses against off-path attacks. Without cryptography, it's essentially not possible to protect against on-path attackers, as they can impersonate anyone to anyone else. There are a number of cryptographic approaches designed to protect against on-path attacks, which I'll be covering in a future post.

The good news, such as it is, is that the correctness of DNS responses has an increasingly smaller impact on user security, especially for the Web. The reason for this is that if traffic is encrypted with HTTPS--which something like 80% of Web page loads are, then even if an attacker manages to change DNS to point you to the wrong server, they will not be able to impersonate the right server. That doesn't mean that they won't be able to mount a "denial of service" attack in which they stop you from connecting at all, but that's nowhere near as bad as impersonating your bank.

It's important to note that there is a big difference between ensuring that DNS responses are correct and ensuring that they are private. Much of the work on DNS security (e.g., DNSSEC) is focused on ensuring correctness of the response but doesn't prevent attackers from learning what domains you are resolving, which has obvious privacy implications. Specifically, not only does your resolver get to see where you are going (this can be a problem in and of itself if your ISP has bad privacy practices) but anyone on the same network does as well. Again, this is something where cryptography can help; more on this later too.

OK, so this was all pretty depressing, but surely now that we have better cryptography, we can do something about it, right? The next post covers the first major standardized attempt to protect DNS, Domain Name System Security Extensions (DNSSEC).