Some stuff about running pacers

Anyone who has cycled in a group or spent a few minutes watching the Tour de France knows that drafting behind another rider dramatically decreases the amount of effort you need to exert in order to maintain a given speed, with the effect increasing the faster you go. This is true to some extent with running, though because running pace is significantly slower even for elite runners[1], the effect is smaller. Nevertheless, it's not nothing and it's quite common to see elite runners use pacemakers for big races or record attempts. Perhaps the most famous example is Eliud Kipchoge's remarkable Ineos 1:59 Challenge run, in which he became the first person to go under two hours for the marathon distance (note the careful wording here; more on this later). In that run, he used a carefully designed pacing structure consisting of five runners ahead of him in a reverse V and two runners side by-side behind him (that's Kipchoge in the white shirt): 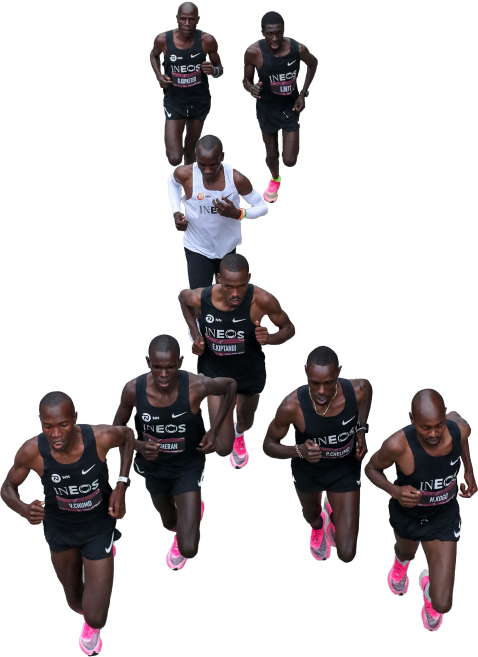 The precise estimates vary, but it seems likely that this pacing technique, along with Nike's "super-shoe" carbon-plated shoe technology, was a not-insignificant contributor to this result.

As I said, it's common for races and record attempts to use pacemakers (often called "rabbits"). Pacemakers serve two primary purposes. First, they break the wind, as mentioned before. Second, they relieve the racers of the psychological burden of maintaining the target pace. Even at the early stages of a marathon, running at race pace is a significant amount of work and it's easier if you can just sit on the pacer and trust them to run at the right speed.[2]

Historically, pacers have been a bit controversial, on the theory that they're not really part of the race. However, they're common practice, and Roger Bannister famously used two to break the four minute mile. At this point, people just remember that Bannister was the first person to break 4:00, not that he used pacemakers.[3]

The World Athletics rules (Section 6.3) prohibit pacing by anyone "not participating in the same race, by athletes lapped or about to be lapped". In other words, pacers must start the race at the beginning and can't just slow down and wait for the runner to lap them. However, because pacers generally aren't as fast as the truly elite runners they are pacing -- else they would be the ones going for the record with someone else pacing them -- what this mostly means in practice is that the pacer runs some of the race at the target pace and then drops out, with the runner going for the win or the record attempt having to finish the race on their own, often running a very substantial part of the race alone. [4] In the Ineos 1:59 challenge, by contrast, Kipchoge had pacers rotating in and out of the event so that he could be paced almost all the way to the finish. This is an obvious advantage, especially with the special pacing formation, and is one of the reasons why this doesn't count as an official world record (the official record, also held by Kipchoge, is an amazing 2:01:39).

Another, potentially less obvious, result of this rule is that things are different for women. In track events, women and men compete separately, but in road races such as marathons it's reasonably common for men and women to compete together. However, because men's distance records are approximately 10% faster than women's across the board (for example, the women's marathon world record is 2:14:02, over 12 minutes slower than the men's record), it's quite possible to find male pacemakers who can run the whole race at the target women's pace.[5]. For this reason, there are separate world records for female-only and mixed-gender marathons with the women's only record of 2:17:01 being almost 3 minutes slower than the mixed-gender records 2:14:04 (see the Wikipedia article here).

Of course, outside of elite competition, it's easy to find people who can run the whole race at a given pace, and often marathons will have pacemaking volunteers tasked to run at specific finish times to make it easier for runners to hit those paces without having to pace the race themselves; they just have to follow the pace group.

Trail ultramarathons (say 50 miles and up) will often allow what they call "pacers" but the situation is rather different.[6] Instead of being required to start the race with runners, pacers are usually only allowed to pick up their runners well into the race. For instance, at Western States pacers are allowed after mile 62. Moreover, you're allowed to have rotating pacers. It's pretty common to have friends pace you, and because at this point the runner is fairly tired, it's usually pretty easy to find someone who can keep the pace.

This makes a certain amount of sense. Paces in these races are relatively slow. For instance, Jim Walmsley's JFK 50 record of 5:21 is 6:25/mile (3:59/km) pace and his Western States 100 record of 14:09 is about 8:29/mile (5:17/km), and so the effect of drafting is correspondingly less. Instead, the primary purpose of pacers is moral support: because the race is so long and you're so tired towards the end, it's extremely helpful -- or so I hear -- to have someone to keep you company and help you stay on track. In addition, US ultras typically start in the morning, which means that your pacer will often be accompanying you for the section of the race you run in the dark[7], so it's arguably also an aid to safety to have someone with you through the somewhat more dangerous dark portions in case you fall, get attacked by a mountain lion, or whatever.