One of the attractive aspects of running as a sport is that it seems fair: the fastest person wins, not the person with the fastest shoes, the fastest car, or the best tennis racket. Now, this was never entirely true as shoe weight absolutely makes a difference and so runners have picked lightweight shoes to race in for years, but there were lots of lightweight race shoes and it probably didn't matter much which brand you bought.

That all changed in in 2017 when Nike brought out a shoe called the Vaporfly. The Vaporfly included a bunch of elements that had appeared in previous shoes but put together in a new way:

As Alex Hutchinson points out in in a worth-reading a Outside online article, these elements all preexisted, so you might have thought it wouldn't matter. In particular, Hoka One One famously make super high stack height shoes. Hutchinson imagines the following conversation between Nike and the International Association of Athletics Federations (IAAF) (now known as "World Athletics") who makes the rules about what equipment is legal (read the whole thing):

IAAF: Okay, then I think we’re good. Your three “innovations” sound like you’re just rehashing ideas that have been used in running shoes without controversy for years, if not decades.

Nike: But here’s the thing: we’ve got the mix just right. These shoes are way better than any previous shoe. They’ll improve your running economy by four percent. They’re going to annihilate every world record in the book!

IAAF: [sound of prolonged laughter in the background, then speakerphone is switched off and the laughter is disguised as a cough] Of course, of course. They sound wonderful. Put it all in the press release, I’m sure it’ll be a big hit. No worries on our end.

But here's the thing: Nike was right. There have been a number of studies here, but the TL;DR is that the Vaporfly works. For instance, in 2019, Hunter et al. found that runners in the Vaporfly 4% used 2.8% and 1.9% less oxygen than those in the the Nike Zoom Streak and the Adidas Adios Boost respectively. Oxygen use isn't perfectly correlated with speed, but the NYT's very extensive analysis of race data from Strava found that the Vaporfly is about 4% faster than the average shoe. It's hard to overstate what a big deal this is: 4% isn't going to turn me into Kenenisa Bekele, but it's roughly the difference between 1st (Eliud Kipchoge) and 14th (Stephen Kiprotich) in the men's marathon at the Rio Olympics.[2] To make matters worse, Nike has kept improving their shoes, following up with the Vaporfly Next%, and the ridiculous looking but apparently quite effective Alphafly: 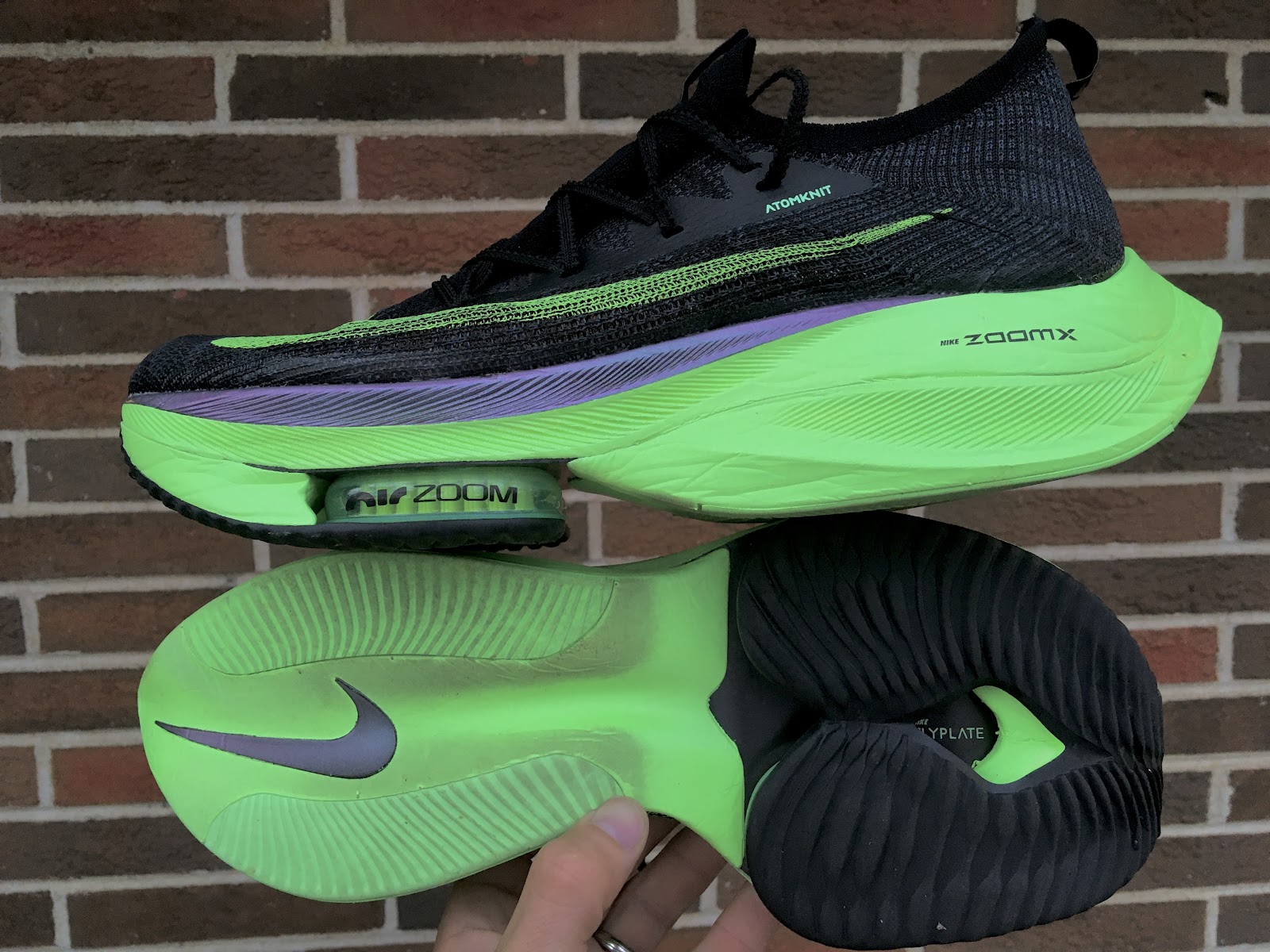 Pretty much as soon as it became clear that the Vaporflys really were better, there started to be criticism (the pejorative phrase here is "technological doping"). It seems to me that this kind of misses the point. The rules about what you can and can't do in a given sport are generally pretty arbitrary and historically contingent. For instance, If everyone just ran in rubber-soled shoes and someone suggested you put little metal nails on the bottom of your shoe to get better traction, that would sound like cheating, but of course spikes are ubiquitous in track and cross-country. Or take race walking, which requires you to have one foot on the ground at all times.[3] Obviously, if you just start running in such an event you're cheating, but nobody thinks you're cheating if you run in a 10K. For this reason. I don't think it's that helpful to frame this question in moral terms; what's important is having a common set of rules that allow for competition, and the introduction of the Vaporfly disrupted that equilibrium.

For a while Nike had an enormous lead here and if you wanted to be fast you really wanted to wear the Vaporfly, but inevitably other shoe companies started rolling out their own carbon-plated high-stack supershoes, so now we've got an arms race on our hands. In an attempt to address this, WAF issued new rules in April 2020, including:

This last requirement was removed in December.[5] As far as I can tell, at this point you can more or less wear whatever prototype shoe you want as long as they meet the technical conformance requirements.

While there is plenty of evidence that supershoes are faster. It's actually somewhat unclear exactly why. There are a variety of theories (it's the stack height, it's the new foam, it's the stiff carbon plate, no it's not, it's the thick foam but you need the carbon plate to keep it stable). Regardless, the existence of shoes which significantly improve performance raises some obvious issues.

For amateurs, the question of fairness is mostly about whether they can buy the shoes (or how much they cost), For professionals, however, fairness is less about access to shoes than it is about sponsorship. One of the main ways in which professional runners make money is by shoe sponsorships. Understandably, the company wants their athletes to wear their products. A good example here is the 2020 US Olympic Marathon trials. When these were held, the Vaporfly Next% was already widely available, but this didn't help you if you ran for a brand that didn't have a plated shoe yet, because understandably your sponsor didn't want you wearing Nikes, even if that made you faster, because having you win in the competitor's shoe doesn't help them much. [6] As described in this article in Runner's World, a number of runners dealt with this by wearing Nikes in disguise, as below (the point here isn't to fool anybody, but just to avoid showing the competition's logo):

Note that the (now removed) four month availability rule doesn't actually help here that much because the athletes are tied to a single manufacturer. If athletes were free to choose their own shoes, then they could just buy the best shoe on the open market[7], but if they're required to wear their sponsor's shoe[8] and if one manufacturer (in this case Nike[9]) has a technological lead, then it doesn't help that their shoe is widely available. On the other hand, it's not clear it helps to have the rule removed either, because now everyone is just wearing prototype shoes that are four months (or whatever) newer.

The hope seems to be that there are some natural limits to how much better this type of shoe can get. If that's true, then eventually the difference between successive generations of shoes will become relatively narrow and it won't be much of an advantage to have the absolutely latest shoe. The restriction on the stack height is presumably intended to help produce this result.

One potential complication here is that it there seems to be a fair amount of variation in how much advantage people get from the new shoes. For instance, (at least according to the abstract, which is all I have) Madden et al. report that some runners in a stiffer shoe ("responders") showed a 2.9% increase in running economy whereas others ("non-responders") showed a 1% decrease. This suggests a potential new source of unfairness in which some runners get the benefit of the new shoes and others do not. Even more interestingly, it seems like different runners do better with different levels of stiffness, so you might have a situation in which two runners could in principle benefit equally from plated shoes with appropriate stiffness, but because of what's actually available one gets an advantage over the other. This potentially gives an advantage to really elite runners, whose sponsors will make shoes more or less to their specifications. This happens already to some extent -- for instance, Salomon S/Lab has built shoes specifically for Kilian Jornet and Francois D'Haene -- but there's a difference between a shoe that fits your feet perfectly and one that makes you 2% faster.

With any luck, we'll find out that there's a practical limit on how much better shoes can be made with this technology. If that's true, then every manufacturer will start making one and it won't matter what brand you're attached to. If not, though, we may be in for a rough few years. Oh, yeah, before I forget: while all the shoes I've been talking about were for road running, Nike has a new carbon-plated spike and the North face just recently rolled out a carbon-plated trail shoe, so I doubt we're through with this just yet.