My first, and maybe only, podium finish

On July 17th, I raced the Pacifica Foothills 30K. This wasn't really on my training calendar, but a colleague decided to run it and I offered to drive her, figuring I could fit in a catered 18 mile training run. And then at the last minute my friend Lisa decided to run the 21K, so it was a bit of a group thing. 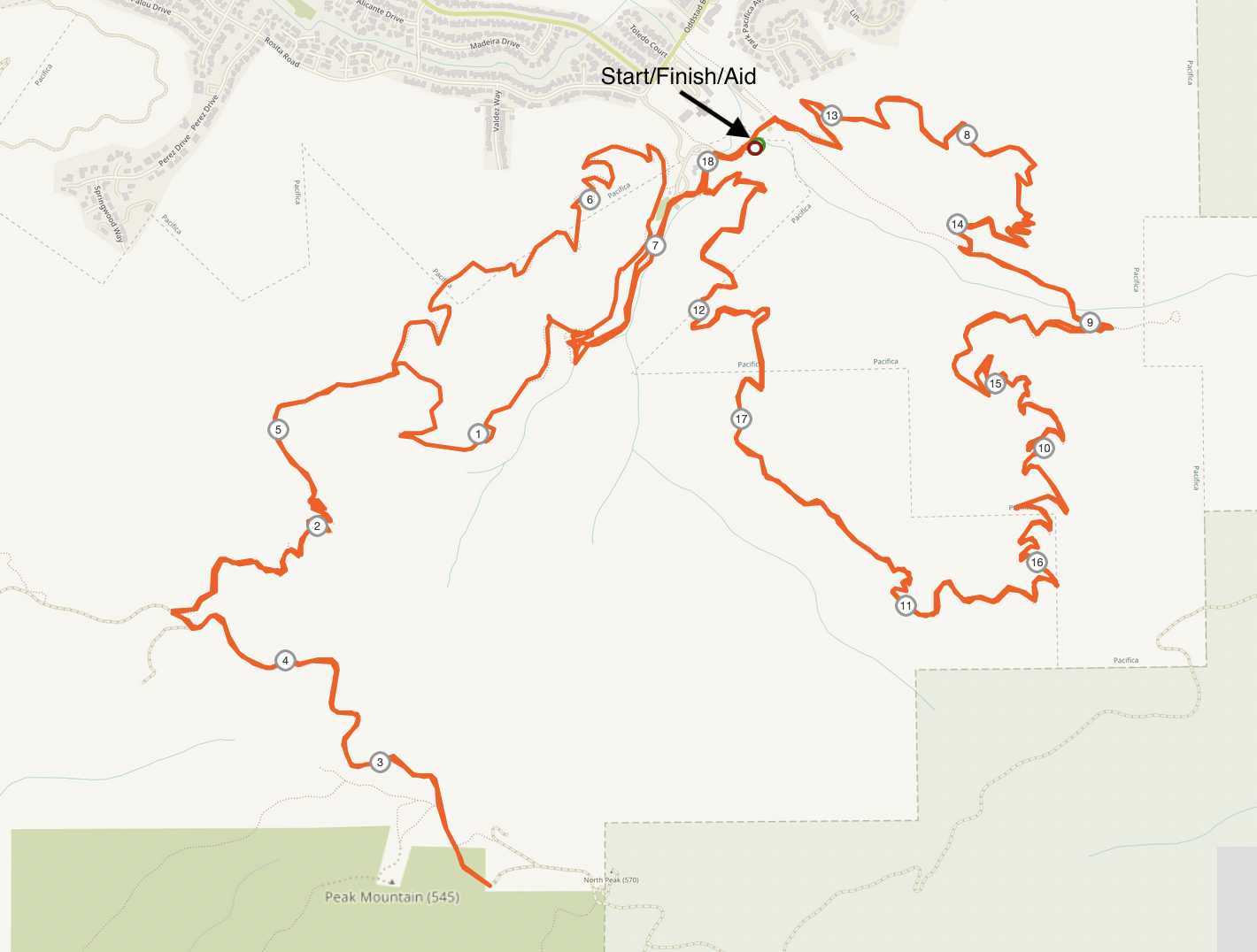 Because this was just wedged in and not really part of my build for UTMB, my coach Emily Torrence and I decided to just train through it without really tapering at all, and just use it as a training event. The course is laid out as a (mostly) out-and-back followed by two loops, with a single aid station at the start/finish. The out-and-back is advertised as 7.5 and the each loop as 5.7 for a total of 18.9, with a total of around 4000 ft of climbing; and the plan was to run the out and back and first loop at typical long run pace and then if I was feeling good I would run the last loop at marathon to 50K effort (what's called a "fast finish" run).

Usually a small local race like this would be pretty laid back but I had to fly to London right after and then from there to Philadelphia and eventually to Utah for Tushars 70K, so I had to pack all that stuff up beforehand, and then rush home afterwards to get to the airport, making the logistics a bit complicated.

The race was small and things are pretty chill at the race start and I managed to get into the bathroom right before the gun went off. It helped that they actually started a few minute late, so even though I got out of the bathroom at about 8:29 I had a few minutes to get set. The race starts out climbing and I'm usually a pretty fast climber so I decided to start out pretty close to the front.

From about mile 1 it was surprisingly rocky and technical—not ridiculous but not your typical buttery California single-track—so I wasn't going that fast. Even so, I was quickly passing people. I wasn't quite sure where I was but figured I wasn't too far off the front.

Eventually I settled in behind a pair of women who (spoiler alert) turned out to be the first and second women. They were moving just a bit slower than me but I decided to just camp out for a little bit and keep things in the easy zone. Eventually I started to feel like it was too slow, though, so I passed the second woman and then the first, but she quickly re-passed me on a downhill. Around 2ish miles the trail opened up onto some fire road which went all the way to the top.

I hadn't read the elevation profile that carefully and was expecting the top of the hill to be halfway through the segment, but it came up quite quickly. There's just a set of flags and some rubber bands and the idea is you grab a rubber band that proves you went to the top (very secure!) and then head back down. One nice thing about this out-and-back structure is that it lets you see where you are and I counted two men and one woman in front of me, which put me in fourth overall and "on the podium" as they say (though there's no actual podium in these small races).

This was supposed to be a training run not a race so I was trying to be pretty careful on the way down, which also meant I wasn't going as fast as others. The second woman tore by me pretty quickly and about half-way down two other men passed me as well, putting me in the 5th male position. Even with being careful, the terrain was a bit tricky and I rolled my left ankle pretty far. Fortunately it was just short of real injury, so it hurt for a minute or two but I was able to shake it off. I didn't lose any more places on the way down.

The way back was quite a bit longer than the way up, due to a somewhat different route after the out and back segment. It also had a few small climbs, which wouldn't ordinarily be that big a deal but I was looking forward to the aid station. Anyway, I rolled in in good order, refilled my bottle with Tailwind and headed back out.

The loop portion of the course is arranged as a .8 mi/400 ft climb followed by a 1.7 mi/700 ft climb. Ordinarily these wouldn't be that hard but at this point it was starting to heat up and there wasn't much shade. Fortunately, this was nice smooth trail so it was just a matter of grinding it out. There are a lot of switchbacks and false summits on the second climb so it's a bit hard to know when it really ends.

I was starting to get a bit confused about my place because some of the 21K people had started to pass us (the start was 15 min later). At this point, though, there were three people nearby. I know this because they were moving slowly on the climb—including walking—where I was climbing pretty well, so I'd close in on them or even pass them on the way up and then they'd pass me on the way down. I wasn't really racing this but it was a little difficult not to feel competitive at this point, so I had to make some effort to hold back. I did get a chance to see what race people were running and the answer was "two 30K, one 21K".

At this point I was back at 5th overall/3rd male, and things were going well but I must have been starting to feel tired because right around the top of the loop I caught my toe and went flying. I sat on the ground for a few seconds to check myself out, concluding that I was uninjured and just bleeding a bit, so got back up and headed down the hill.

I would have descended reasonably cautiously anyway, but after this was even more cautious and so the same two guys caught me again on the downhill. I tried not to worry about it and just cruised into the aid station. I got some more Tailwind, grabbed a gel, told them I wasn't badly hurt, and headed back out. I looked over and saw that the clock was reading 2:12, which is ahead of where I expected to be (and actually turns out to be long because they started the clock at 8:30 and not at the actual start time).

I was feeling pretty OK at this point and I already knew what the course was like from here, so I decided it was time to pick up my pace for the fast finish section. Based on my lap times I wasn't actually going that much faster on the climbs, but everyone else was really slowing down, so the effect is still to have you going quite a bit faster than the people around you.

On the first climb I quickly passed the 3rd (who turned out to be Alastair from Trail and Kale) and 4th man and then the woman who had been first when I saw her but had slowed down and was now the second woman. In the past, both men had caught me on the first descent so I was a bit worried that might happen again, but I let myself open up some and so managed to stay ahead. I spent the next climb trying to put some more time on them—and wishing I'd paid more attention to the exact profile so I knew when it would be over—and then the descent simultaneously trying to keep my pace up and waiting for footsteps behind me, but never heard any.

I rolled into the finish with the clock reading about 3:07. My watch read 3:05:38, and the official finish reads 3:04:51. Lisa had already finished and she told me that I'd finished 3rd, and sure enough when I talked to the guy running the finish I was, so I picked up my 3rd place trophy and 2nd male coaster, took a selfie, and headed home. 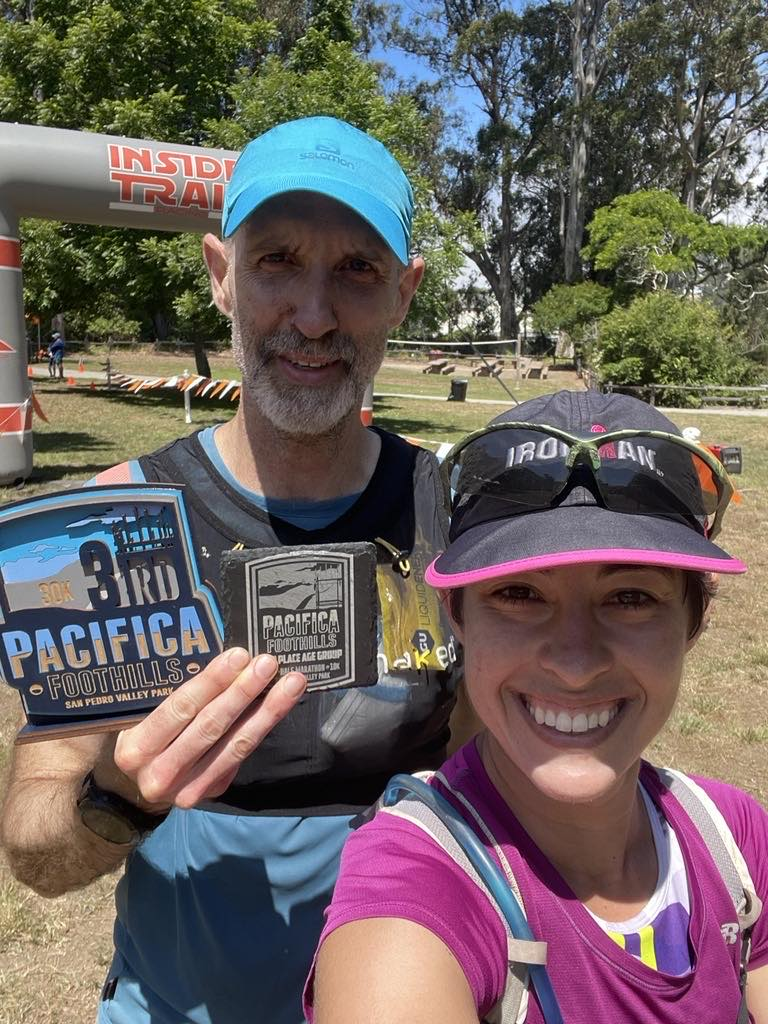 [Lisa and me at the finish]

I would call this race a success. I executed on the plan more or less exactly and came away feeling tired but not dead. It's just a local race but I think this is the highest place I've ever had. That's a pretty solid outcome with no taper and running most of it at my usual long distance run pace. Plus, I was even able to switch gears a bit at the end, especially in comparison to my peers: the next finisher came in at 3:09:01, so that's putting a 4 minute lead on them over a 55 minute loop, which is a pretty big gap. I think if I had tapered and tried to race the whole thing I would have got in under 3:00, though I would have needed to drop almost 8 minutes (a bit under 5%) in order to have made men's second, which might just barely be possible.

My nutrition went fine: I figure I took in about 700 calories (2.5 bottles of tailwind plus 2 gels), which is a bit light for my usual target of 300 cal/hr, but it's OK to go into the hole a bit on something this short.

As usual, footing remains a problem, especially on technical stuff. Neither my ankle or the fall turned into that serious a problem but either could have been and with UTMB coming up I really don't want to get injured; I've raced on an injured rib and it's no fun. It all worked out OK though.