This is part III of my series on Privacy Preserving Measurement. Part I was about conventional measurement techniques Part II showed how to improve those techniques by anonymizing data on input. This post covers a set of cryptographic techniques that use multiple servers working together to provide aggregate measurements (i.e., a single value summarizing a set of data points) without any server seeing individual subjects' data, anonymous or otherwise.

Probably the best known--and easiest to understand--of these is Prio designed by Henry Corrigan-Gibbs and Dan Boneh. Prio is already seeing initial deployment by both Mozilla and Apple/Google/ISRG. Prio allows for computing a variety of numeric aggregates over input data, as described below.

The basic idea behind Prio is actually quite simple. The client has some numeric value that it wants to report (say, household income). It takes that value and splits it into two shares (I'll get to how that works shortly) and sends one share to each of two servers. The sharing is designed so that only having one share doesn't give you any information about the original value. Every other client does the same and so now each server has one share from each client. The servers then aggregate the shares so that they have a single value which represents the aggregate of all the shares. They then send the aggregate to the data collector who is able to reassemble the aggregated shares to produce the aggregated value, as shown below: 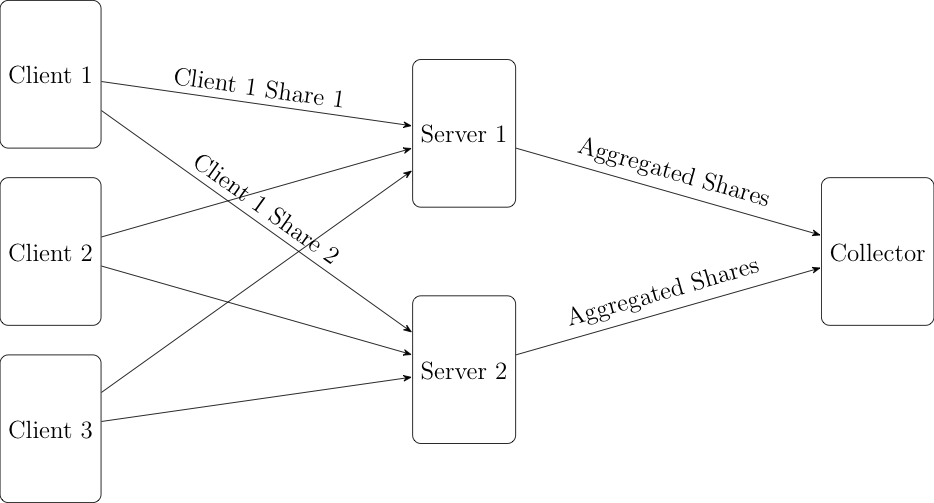 The actual math behind splitting the secret into two shares is actually quite simple.

If we denote client i's value as X_i, then i computes:

The result is that server one gets all the R values and server 2 gets all of the true values - R. The aggregation function is just addition, so server 1's aggregated share is

and server 2's aggregated shares is

in other words, the sum of the original values. Magic, right?

I'm playing a bit loose with the math here: for technical reason the values have to be non-negative integers and you have to do the math modulo a prime number, p (say 64 bits or so), but none of this affects the reasoning above.

This may all seem kind of obvious, and this kind of secret-sharing based aggregation predates Prio. But I've omitted something really important: what happens if the client submits bogus data? In a conventional system where the data collector sees the raw data, they can just apply filters for data that appears to be bogus, such as by discarding or clipping outliers. For instance, if someone reports that their yearly household income is a trillion dollars, you would probably want to double check that. However, this isn't as simple a matter with a system like Prio because neither server sees individual values and the collector just sees the sum, at which point that's too late: if they total household income of 1000 households is $1,000,030,000,000 then something is clearly wrong, but you don't know whose submission to discard.[1] The complicated part of Prio is addressing this problem.

There are actually two kinds of bogus inputs:

It's generally quite difficult to detect and filter out the first kind of input because, as I say, it's plausible. What we want to do is filter out the second kind of bogus input.

The way Prio does this is by having the clients submit a zero-knowledge proof (ZKP). The details of how ZKPs work are out of scope for this post, but the TL;DR is that it's a proof that has two properties:

Because the proof has to apply to both shares and each side only has their own share, the servers have to work together to verify the proof (actually each side gets a share of the proof).

This general idea isn't new to Prio, but what's new is that the proofs are exceedingly efficient, which makes the idea far more practical than previous systems.

The basic unit of operation of Prio is addition, which seems kind of limited, but actually is surprisingly powerful. The trick is that you have to encode the data in such a way that adding up the values computes the function you want. Here are some examples (mostly taken from the Prio paper):

There are also algorithms for boolean OR, boolean AND, MIN, MAX, and set intersection. Somewhat surprisingly it is also possible to do ordinary least squares (OLS) regression as well.

While very powerful, this highlights an important difference between techniques like Prio and the conventional "just collect it all" approach (and to some extent the proxy approach): you need to know a lot in advance about what measurement you are trying to take because you need to have the data encoded in a way that is suitable for that measurement (or potentially even invent a new encoding). This is a general pattern in privacy preserving measurement: it's not just one technique but a set of techniques designed for taking different kinds of measurements.

I've presented the above as if the servers just aggregate any given batch of client data and send it to the collector, but Prio and similar systems can also be used in an interactive setting to look at subsets of the data sets. Recall in the previous post where we had to break up household income from the other values in order to avoid de-anonymization attacks. With Prio we can do better by having each subject submit their demographic data in the clear but the household income with Prio. This produces a submission that looks like this:

The result is that each server ends up with a list of shares tagged by demographic information. This allows them to compute aggregates for subsets of the data set. For instance, you could show the data broken up by household size, or the nationalities of the members, or by both (using crosstabs. This is also enough information to do hypothesis tests like Chi-squared. The obvious cost, of course, is that the demographic information isn't private. In some cases you could have replicated this result with everything being private (e.g., if you wanted to just do OLS[3]) but in general it's more flexible if some of the data is unencrypted.

This brings us to the topic of operational mode: above I've presented things with what might be called a "push" model: the servers compute the results and send them to the data collector. However, for exploratory data analysis it's more convenient for the data collector to drive this. For instance, you might ask for a breakdown by household size and then later ask for a breakdown by household size and age to distinguish multigenerational households from families with a lot of children. There are a number of potential ways this can happen.

Each of these has some potential operational advantages; we're just starting to see the development of publicly available Prio services now (see this annnouncement by ISRG, the people behind Lets Encrypt), so it will probably take some time to get enough experience around the best practices here.

The privacy protection provided by Prio depends on the number of individual data values being aggregated. Obviously, if you're just aggregating one value it's the same as having value itself, but if you are aggregating only a small number of values, then the level of privacy is reduced. So, clearly for Prio to work the servers have to insist on minimum batch sizes for the aggregation. Even so, however, there can be attacks based on controlling the input data.

The simplest version is what's known as a Sybil attack. This is easiest to mount in the model where the data collector holds the shares and just asks the servers to aggregate them for it. In this case, it takes the one submission of interest and batches it up with batch_size - 1 fake submissions where it knows the value. It can then compute the submission's real value just by subtracting its own fake values. This is a somewhat limited attack in that you need to do an unreasonable number of aggregations in order to learn a lot of people's data, but it's still concerning, especially if you only want to learn about a few people.

Even in cases where the server just provides API access--or have some other anti-Sybil defense--it's still possible to isolate individual submissions. The basic idea is that you divide the data set into partially overlapping subsets and can then learn information about the difference in the subsets. As a contrived example, suppose we have the following data set and a minimum batch size of 2.

All of this technology is quite new, but there's already a lot of interest. As I said above, there have already been several deployments of Prio and there is currently work on bringing Prio and some other systems to the IETF for standardization, so I expect we'll be seeing a lot more activity soon.

Prio and similar technologies mostly operate at the level of sets of numeric values. As we've seen above, this can be surprisingly useful, but doesn't work well when you want to collect non-numeric values. In the next post I'll be covering some technologies that allow for collecting arbitrary strings.